All too often I come across the common joke of having half-finished or abandoned software development projects most likely because so many people (including myself) can relate to it. 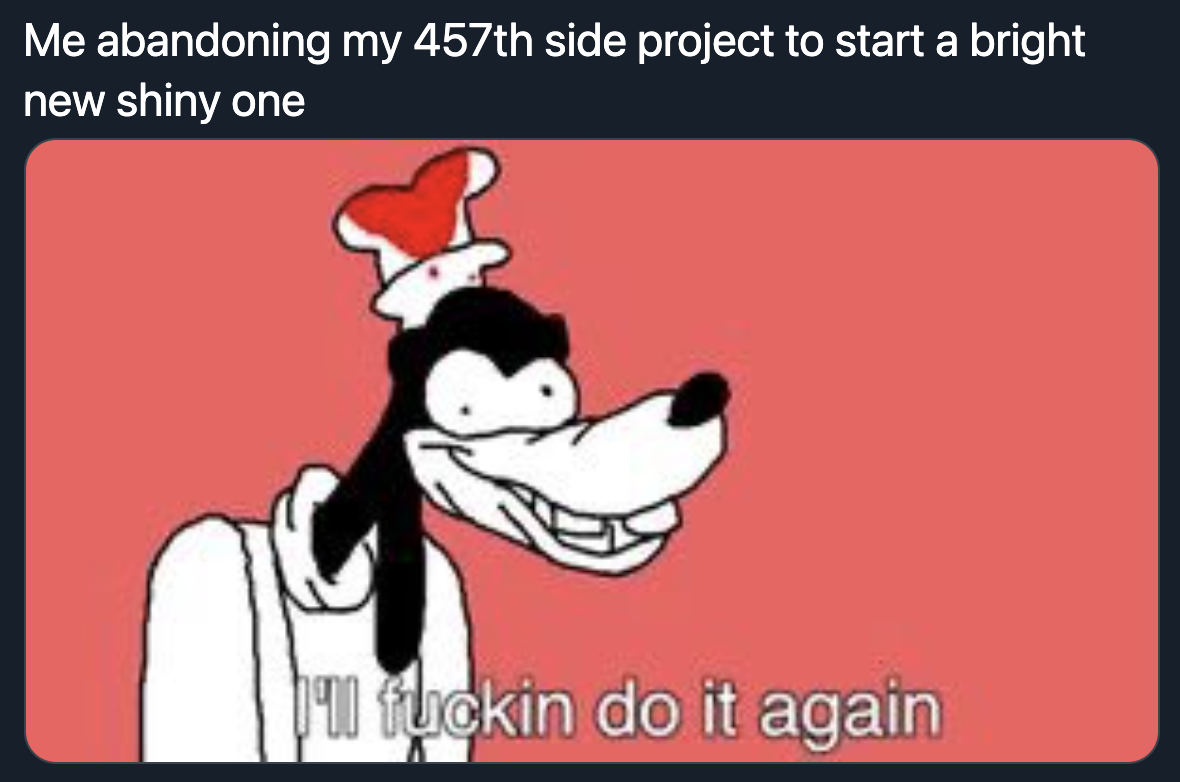 I strongly believe that most side-projects are doomed right from the start.

People gather inspiration from these "10 Project Ideas For Your Portfolio" posts that are usually pretty vanilla and have been built a million times before. To me, they just seem to lack inspiration and creativity.

There's nothing wrong with building these projects for learning purposes and showing companies your current skill set, but these are the projects that you'll work on for a couple of weeks and then never be touched again.

Find your own custom solution(s) to problems in an industry that you are passionate about.

The project ideas that I have been by far the most passionate about are the ones that I come up with myself and involve industries that I am interested in like software development, sports, gaming, etc.

Being more familiar with the industry gives you a much better opportunity to recognize common problems and think of possible solutions. These solutions are now the potential birth of your next project 😄

Yes, this approach will take more time to brainstorm and plan but it also unlocks a ton of motivation and prevention of burnout in the long run.

Projects become boring when they start feeling like work, building your own projects on your own time is a much more enjoyable experience and can lead to endless learning opportunities.

Before moving forward, take a little bit of time to look around and see if this problem has been solved before or how often the problem is being encountered.

Has this problem been solved before? If so, how can you make it better? How long do estimate it will take to build? Do you want to put that amount of time into building it?

Try to determine if your project is leading towards a dead-end before you reach it.

🚦 Slow Down... Start with Proof of Concept

Great! So now let's assume you have your perfect idea and are ready to take over the world!

But let's slow down... before you spend the next few months keeping your idea behind a curtain for a grand reveal, I'd recommend more of a deploy now & optimize later approach.

If you are someone who wants to build something more mainstream, I much would suggest deploying early & often to see if it gains the interest you expect before wasting countless hours on it.

Popularity isn't everything, if you build something just a few people would benefit from I would consider it a success.

The main goal here is deciding to solve a problem and then building the solution. You prove to yourself and others that you can solve real-world problems and use that momentum to solve the next one!

Show Your Idea To The World 🌎

Along with everyone else, I wish I had a magic marketing button (follow my Twitter 😉) that gets the word out about the next great thing I build.

Back to reality... finding ways of getting your ideas & work in front of people's eyes is just as difficult/important if not more than building the idea itself.

Learning in public and showing in public can be 2 great ways to increase traffic as you continue to build your project.

For example, writing blog posts or creating YouTube videos explaining how you solved a technical problem or introduced a major feature can generate a good amount of traffic.

Not only will you help the community that encounters the same problem that you did, but it will attract people to what you are building, and who knows maybe some people would be willing to contribute to the project!

Unfortunately, most projects never get to this point.

With a great idea and a strong initial backing, you can decide if your project would be something you would want to work on full-time or not.

This decision can be difficult especially for people who have consistently paying jobs and see it as a possible risk.

Every case is different so there is no one right answer so I won't go too much into detail on how to go about this... especially because I don't have a side project that has reached this state (yet) 🤐

Showcase Your Side Projects 🏆

Do you have a side project you are currently working on and are proud of? I would love to see some in the comments and check out some of your work.